IDEAL JOB FOR THE UNEMPLOYED: Russian agent in Serbia

If there are Russian agents in Serbia at all, it is a dream job that is carried out under the national slogan "lay down bread, so that I can eat you". What could Russian spys do? To reveal some well-hidden state secrets? Well, our Russophiles bring them such things voluntarily, on a tray, along with breakfast, newspapers and morning coffee. To spread Kremlin propaganda? The one in question reached its maximum a long time ago, we are not even lagging behind Russia, it cannot be more up to date. To create an anti-European and anti-American mood? We have already achieved this a long time ago, almost the entire political, intellectual and media scene is working hard on it. 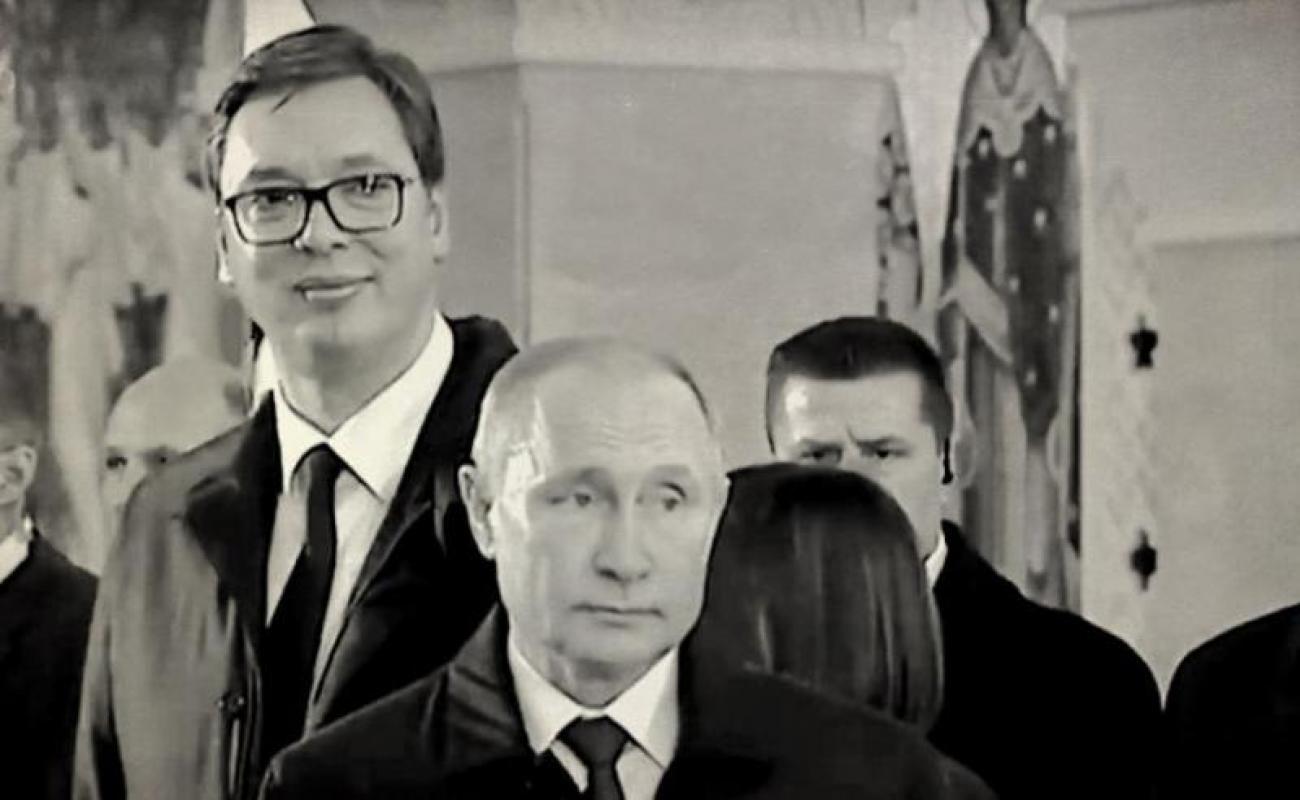 A few days ago, Bulgaria expelled 70 Russian diplomats, which broke the record in the popular discipline "Recognize the Russian agent and bring him back home". After Russia invaded Ukraine, many countries came to the sudden knowledge that some members of the Russian diplomatic staff are engaged in somewhat illegal activities, for example, espionage, undermining state security, hybrid war and similar non-diplomatic operations. 60 diplomats were expelled from the USA, 17 from the Netherlands, 25 were declared undesirable by Spain, Poland – 45, Belgium – 21, and so on. Among the countries that have reduced the number of staff in Russian embassies are France, Canada, Sweden, Norway, Croatia, North Macedonia, the Czech Republic, Slovakia, Italy, Denmark, Estonia, Latvia, Ireland, Romania, Australia…

After announcing at the beginning of April that 40 Russian diplomats would be expelled from Germany, Foreign Affairs Minister Analena Berbok explained the reason: "We believe they are working for the Russian intelligence services. They have five days to leave Germany... We will not tolerate this anymore." The French General Directorate for Internal Security announced something similar in those days, saying that they discovered a secret operation carried out by the Russian intelligence services on their territory, and that is why they declared six Russian diplomats as undesirable persons.

There are never enough Russian diplomats

The Russian diplomatic staff turned out to be unusually numerous. After the expulsion of those 70, 43 remained in Bulgaria in the Russian embassy. By comparison, the Bulgarian embassy in Russia has a total of 12 employees. It's a pity that Russian diplomacy is shrouded in secrecy, it would be fun to see the systematization of jobs in a Russian embassy. Secretaries - 38, translators - 23, system administrators - 12, drivers - 35, cooks - 16, repairmen - 18…

Serbia has no problems with Russian agents, our services have not noticed any strange activities of Russian personnel, and our authorities stick to the motto "There are never enough Russian diplomats". It is not known how many people the Russian embassy here employs, but however many there are - it is a pure waste of money from the budget. Considering the Russian-colonial atmosphere in our society and the adoration of Vladimir Putin, who is almost as popular as Aleksandar Vučić, there is no doubt that countless Russophiles would do for free what the Kremlin pays dearly for.

Last year, Russian opposition politician Vladimir Kara-Murza announced that he and a group of other opposition members held a meeting in Belgrade at the beginning of May. It is not very safe in Russia, they tried to hold a seminar for opposition candidates for councillors in Moscow, but they were all arrested, all three hundred of them, and it was made clear to them that such gatherings will no longer be tolerated. Visas are not required for Serbia, so the Russian opposition members logically opted for Belgrade. Kara-Murza says that they were followed in Belgrade and that the Minister of Internal Affairs, Aleksandar Vulin, handed over the transcripts of their conversations to the Secretary of the Security Council, Nikolaj Patrushev, in mid-May in Moscow. According to his claims, it was these transcripts that served as the reason for the arrest of opposition member Andrej Pivovarov at the end of May.

When this story was started in January, Vulin, of course, denied everything, saying that Kara-Murza is either a fool or a spy posing as an activist (the latter is a typical Kremlin narrative), threatened him with a lawsuit, and emphasized that is is a "dangerous and calculated meanness, in order to present Serbia as a non-sovereign country governed by others". Vulin is not exactly known as a being inclined to the truth, but so be it. Kara-Murza replied to this that it is ridiculous that Vulin is only reacting now, as well as that "the state TV Russia 24 broadcasted a report about how great the Serbian secret services are because they have revealed what the Russophobes are doing". He also explained who the Russophobes are: Russian authorities call those who are against the "authoritarian and corrupt regime of President Vladimir Putin".

It is difficult to decide who to believe: the July minister who reached out to the most loyal official Aleksandar Vučić, a man who spreads hatred towards all neighbouring nations and is the main advocate of the Serbian world, or a Russian oppositionist who persistently fights against the criminal regime of Putin, which is why they tried twice to poison him. At the beginning of April this year, Kara-Murza was also arrested, because he spoke against Russian aggression against Ukraine. Pivovarov has been in prison for more than 13 months, he has not yet been tried, and his crime is that he leads the opposition organization Open Russia and that he planned to run for parliament. The standard procedure of terror against political opponents in the dictatorial Putin regime.

Prime Minister at the ambassador's report

Speaking of transcripts of conversations and submission to the Russian regime, we had another bizarre case that also gives the impression that Serbia, as Vulin said, is a non-sovereign country governed by others. Five years ago, as soon as she became the Prime Minister of the Government of Serbia, Ana Brnabić gave an interview to the Blumberg agency. An interview titled "If forced to choose, Serbia will opt for the EU instead of Russia, says the prime minister" is published. Brnabić didn't waste a single hour, but quickly rushed to the Russian embassy, to report to the then ambassador Aleksandar Cepurin, and took him the transcript of her interview, in order to justify herself in front of Putin's envoy and confirm her loyalty to Russia. Truth be told, the title sentence was not in the text, but the entire interview went in that direction, it is not a matter of falsification.

The fact that the person who holds the most important political position in a supposedly sovereign state, at least nominally, is superior to the ambassador of a foreign country, the public did not learn from the Prime Minister, but from the spokeswoman of the Russian Ministry of Foreign Affairs, Maria Zakharova. The spokeswoman generously announced that Moscow accepts the Serbian Prime Minister's explanation, mistakes happen, and the Russian officials have the right to be wrong. To make the subject relationship as obvious as possible, Zakharova's statement was illustrated with a photo of Prime Minister Brnabić handing the transcript to Ambassador Čepurin.

The above examples are not an exception in the relations of the Serbian authorities towards the Russian masters, but an iron rule. The entire state leadership of Serbia shows a supernatural dose of servility towards the Kremlin, which was evident during the visit of every Russian official to the unofficial Russian governorate in the Balkans.

It is enough to recall the rampant and arrogant Vučić literally begging Vladimir Putin to speak to the gathered crowd, at least two or three sentences in the Temple of Saint Sava. The absolute ruler of the whole of Serbia almost fell to his knees before the Russian head, he even hired the then patriarch Irinej to please the Russian dictator. In the end, Putin took pity, I guess he was also uncomfortable with so much licking of the floor and the accompanying mosaic, so he said three words: "Spasiba za družibu" (thanks for the friendship). A truly great diplomatic success of the domestic authorities, both secular and spiritual, it is no small matter to squeeze one phrase from the Russian emperor.

The Serbian ruling caste, which constantly fiddles with national pride, becomes an absolute champion of servitude and spinelessness as soon as it finds itself near a Russian official. There is no lackey, butler, valet or porter who would show such a degree of humility and servility towards his employer. So the question of why Serbia does not expel some Russian agent who falsely presents himself as a diplomat, as dozens of other countries do, is actually pointless and absurd. It is easier to imagine Russian ambassador Aleksandar Bocan-Kharchenko expelling a Serbian official from Serbia, no matter how fantastic it may seem at first glance.

On the other hand, if there are Russian agents in Serbia at all, it is a dream job that is done under the national slogan "lay down bread, so that I can eat you". What could Russian spys do? To reveal some well-hidden state secrets? Well, our Russophiles bring them such things voluntarily, on a tray, along with breakfast, newspapers and morning coffee. To spread Kremlin propaganda? The one in question reached its maximum a long time ago, we are not even lagging behind Russia, it cannot be more up to date. To create an anti-European and anti-American mood? We have already achieved this a long time ago, almost the entire political, intellectual and media scene is working hard on it.

To hold the citizens of Serbia responsible for joining NATO? Unnecessary work, in Serbia neonatology is the favorite scientific discipline of all population, from 7 to 107 years old. It's not worth it, there's not even enough work for medicine. Being a Russian agent in Serbia is just as meaningful as being an ice seller in the Arctic, a heater manufacturer in the Sahara, a logger in the tundra or a librarian in the Serbian Progressive Party. If a Russian agent is pulled back to his homeland or transferred to another country, it can only happen due to inaction and planning.

tomislav marković
Down to 14 + 1: Estonia and Latvia quit China’s club in Eastern Europe Health institutions in BiH receive 253 cold chain refrigerators for efficient storage of vaccines The main myth about Putin is over. What did the explosions in the occupied Crimea reveal 'We Were Nothing To Them': Russian Volunteer Reservists Return From War Against Ukraine Feeling Deceived Grant Award Ceremony, the six awarded municipalities sign the contracts World Bank Allocates $4.5 Billion Grant to Ukraine Bosnia and Herzegovina – Mapping China’s rise in the Western Balkans Vrbovec got a 39 meter high water tower Over 100,000 Mariupol residents trapped in dire conditions under Russian occupation Narratives on the threat of “Ukrainization” found in Serbia and other European countries