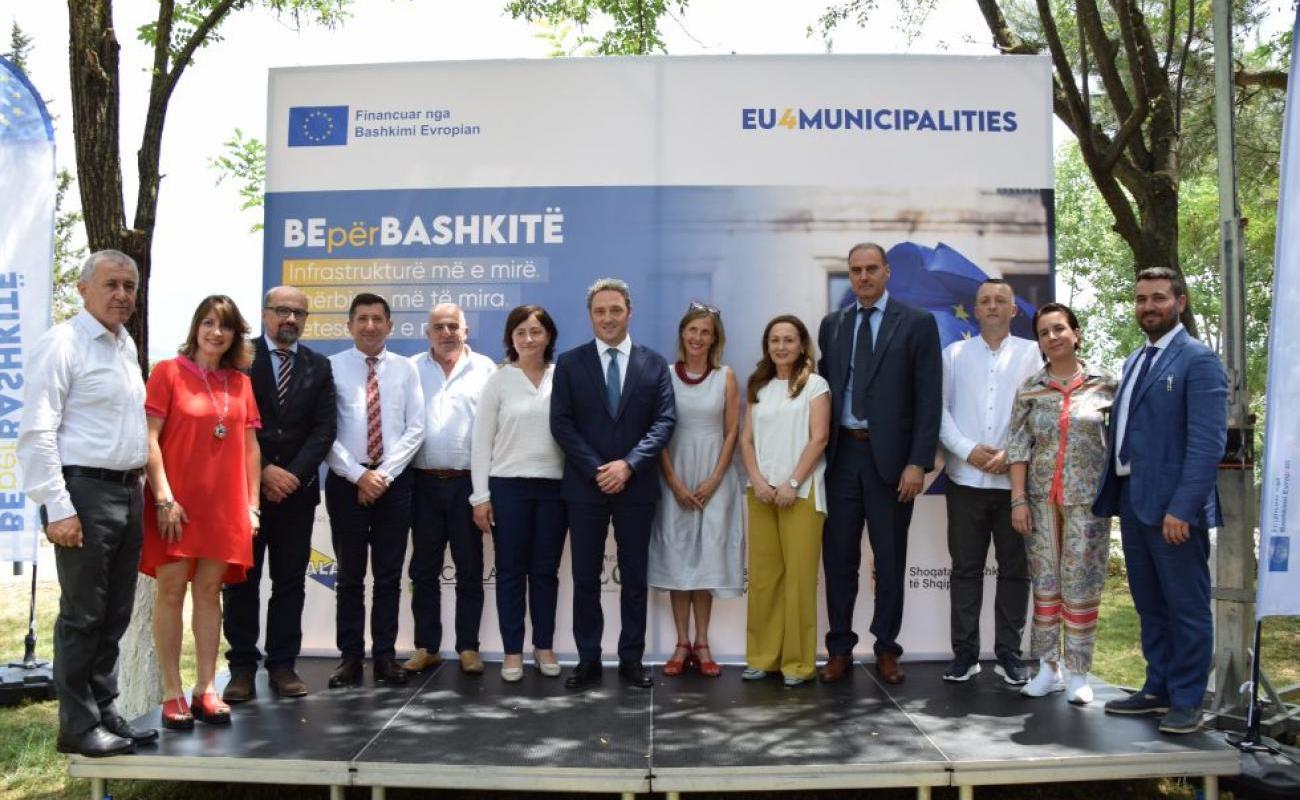 Six Albanian municipalities are awarded with investment grants in the first call of the EU for Municipalities grant scheme funded by the European Union. With the support of 1.1 million EUR, the European Union through this call directly supports the construction, revitalization, and restoration of over 11 educational, social, cultural and commercial facilities in the municipalities of Mat, Berat, Shkodër, Gjirokastër, Pukë, and Përmet  where young people, women and vulnerable categories will be among the main beneficiaries.

The winning projects were presented during the grant signing ceremony organized in the Municipality of Mat with the participation of representatives from the EU Delegation in Albania, mayors and partners of the “EU for Municipalities” project.

In the opening remarks of this ceremony, the head of the Sector of Good Governance, Justice and Law Enforcement of the EU Delegation in Albania, Mrs. Lenka Vitkova emphasized the increase of EU assistance to local government in Albania, which comes as a need to strengthen the municipal capacities as they are the most important actors in the European integration process.

“The role of local government units for the European integration process remains important as 3/4 of European legislation is implemented at the local level. The EU has increased financial assistance to 34 million euros for Albanian municipalities and expanded the range of this assistance to municipalities. At this stage, it is very important for us to deal with capacity development, so that municipalities are able to develop and implement projects to contribute to the European integration process “- said Mrs. Vitkova among other things.

10% of grants for winning projects also comes from the central government through co-financing. The General Director of the Agency for the Support of Local Self-Government, Mr. Enea Hoti, in his speech guaranteed that the government is ready to allocate revenues to all winning municipalities in this call as well as very soon to the winning municipalities in the second call.

Present at this ceremony Mr. Kelmend Zajazi, Head of NALAS, Network of Associations of Local Authorities of Southeast Europe, praised the EU contribution to support the “EU for Municipalities” grant scheme as a pioneering project of the European Union Delegation in Albania.

“We are here to create a new trend that together with the associations of municipalities and the EU delegation to create programs and other instruments for the improvement and modernization of local services, this is what citizens and young people expect”. The implementation of projects from such programs is of great importance and especially for the countries we seek to become part of the EU as they do not need to start from scratch, but are now prepared in the same way as other EU countries.” – declared Zajazi.

Meanwhile, the activity was also greeted by Mrs. Adelina Farici, head of the Association for Local Autonomy and Mr. Agron Haxhimali, head of the Association of Municipalities in Albania who stressed that assistance to increase the capacity of municipalities and support with grants has been an early need of local government to implement projects for the benefit of their communities.

The grant award ceremony was concluded by Mr. Orlando Fusco, Program Manager at the EU Delegation in Albania, who said: “Immediately after the adoption of the decentralization strategy seven years ago, the European Union started supporting the Albanian municipalities and the focus of this assistance was initially capacity building of municipalities. Our activity was focused on creating the corners of the European Union and we thought to find another way of reaction such as this through grants like the “EU for Municipalities” project.

Grant support and ongoing assistance of the “EU for Municipalities” project for capacity building is an important moment for the municipalities in Albania, as for the first time they will have the opportunity to implement projects to improve infrastructure and local services for the benefit to local communities to bring them in line with European standards.

According to the team leader of the project Mr. Elton Stafa this project supports the municipalities in the implementation of their strategic plans and at the same time creates the capacities for the management of the EU financial assistance.

“The quality of life experienced by every resident in urban and rural areas in Albania, is determined to a large extent by the quality of public services, public infrastructure and public spaces created and managed by municipalities. Therefore, we are happy that through the two calls for grants we will transform the lives of citizens in 2/3 of the municipalities in the country “- emphasizes Mr. Staff.